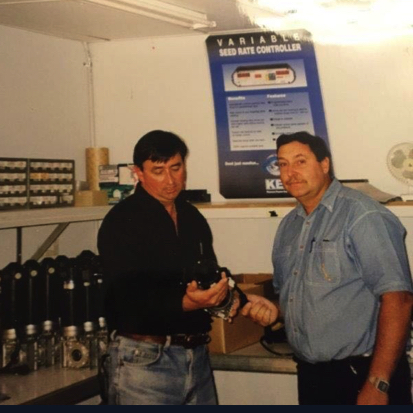 Me and Bernie. Powerhouse VRT pioneers back in the day!

Just in case you were wondering, here is my bio;

Worked as a counter jockey in the parts department, then later as the northern wheatbelt sales rep based in Geraldton Western Australia for Terra Trading Company, a wholesale distributer of ag chemicals and manufacturer of Terra-Hardi Boom Sprayers using Hardi booms, pumps, nozzles and components. Terra was also the sole importer for ALBUZ ceramic nozzles in Australia.

I started my first business, an Ag spray nozzle business, in 1986 at the age of 29. The same year as the birth of the mighty Eagles!

Not so mighty as the Hawks of course, but it sync's nicely with my bio ;)

Terra Trading Company was taken over by ICI Chemicals and the equipment division was carved off to create Hardi Spraying Equipment WA.  That left ALBUZ out on a limb.  Being an enterprising type, I negotiated with the Hardi board and ALBUZ (involving a brief trip a quaint town called Evreux in France) to commence my own business called ALBUZ Spray & Safety Australia and took over the role as sole Australian Importer for ALBUZ.

My ALBUZ business was a success and gained the attention of Nufarm Ltd (via Croplands Equipment).  Nufarm bought out my business. I took on the role of State Manager for Croplands Equipment to develop a branch and Dealer network in WA.

After a couple of years with Croplands I struck out again and became a partner in a small precision ag startup based in Corrigin WA called Precision Farming Australia.  We were into site specific (DGPS located) soil sampling, yield mapping (importing yield monitors direct from Micro-Trak in the US) and developed one of the first commercially successful DGPS guidance systems called Farmlap.  PFA partnered with Kym Eldredge Electronics (the original KEE) in Clare SA.  We handled their air seeder and boomsprayer control systems in WA and they handled our Farmlap guidance system in SA and beyond.

After the Topcon take-over I semi-retired, moved to Asia and being a committed gold bug, started a physical bullion investment company in Singapore. Nothing agricultural about that but a great experience and heap of fun none the less ;)

Back in Aus, the opportunity arose to be involved in introducing ARAG/ASJ Spray-Jet products to you (Australian Farmers and Spraying Contractors) via a new e-commerce business model; Fantastic Nozzles at nozzles.online/

With the exception of my dabbling in precious metals, and a few years in the WA cray fishing industry out of high school (attaining Master Class V) before all of that, pretty much a working life in ag!