See our brief video here, and/or read the full Article below.

If you have any comments or suggestions regarding this or any of the the other articles in this library, please contact me here>>>
Regards,
Dave Young
Dave’s Concise Stubble Spraying Guide
These are general principle’s that apply to summer weed control and pre-seeding spray operations in standing stubble.
The three main factors we have to deal with are;
Spray Operators have to ability to mitigate each of these factors by their own actions.
The first two factors of stubbles ‘catching-up’ too much of the spray mix and that of the shadow effect are both part of the same problem.  Your spray droplets have a forward momentum due to your own forward speed. The higher the speed, the more severe the problems.
As to wheel tracks, that has a narrative all of its own.  Spinning wheels on your boom-sprayer displace air.  The result is usually to displace smaller droplets away from the wheel tracks; we have all seen this!  That’s where nozzles with bigger droplets and greater momentum are a good choice behind the wheels, regardless of what else is on the boom.
Dust churned up from wheels will deactivate some products (e.g. Glyphosate) and the wheels may stir up and redistribute weed seeds and residues too!
5 Actions for Spray Operators to take
# Regarding the tilt back. We are suggesting a moderate angle here, not an aggressively angled nozzle body that would require lowering the boom to maintain droplet velocity. We suggest a nozzle like ASJ Spray-Jet’s Compact Fan Air TILT (stubble JET) with a 13-degree angle built in that you can use in conventional horizontal nozzle bodies.  You can check them out here.
# The danger with air-induction nozzles generally is not with high pressure (due to their very low %age volume of small droplets), it is with LOW PRESSURE.  Under 200 kPa or so, the fan angle of most air-induction nozzles will decrease affecting your evenness of spray pattern.  Thus decreasing the momentum of your larger droplets. This may lead to poor kill and resistant survivors, all bad stuff! Regardless, always consult the manufactures full technical specifications when making your nozzle selection.
# The water rates are governed by label recommendations and we suggest that generally speaking, the more the better. GRDC’s Bill Gordon have given some useful guidelines in this video.  Check out Bill’s comments here.
Another dependable reference on spray volume is Dr. Jorg Kitt’s “Spraywise – Broadacre Application Handbook” published by Nufarm (Australia).  This comprehensive handbook standard issue to most Australian Spray Operators as part of their Level 3 Training Course.
“…if 50% of the ground is covered with stubble only half the spray volume will hit the soil directly; the other half will strike stubble. To optimise applications in this situation it is important to produce droplets with sufficient velocity to increase bounce and splatter. The applicator should use higher water volumes (70-100 L/ha) and a coarse to very coarse spray quality. In a clean bed spray quality and water volume have little effect. A coarse spray quality and water volumes above 50 L should be sufficient to achieve efficacy.”
Tom Wolf & Jason Deveau comment on their sprayers101 website that; “These volumes are low for North America (Australia uses nerve-rackingly low volumes) but otherwise this is solid gold.
# We have figured out a simple wheel tracks system for you.  Check out our Wheel Tracker Kit here.
Conclusions
What I am doing here is summarizing all of important things that you already know into one concise page to serve as a handy reminder as we move into the post harvest, summer spraying period.  Happy spraying to you ;)
Article by Dave Young
January 2017 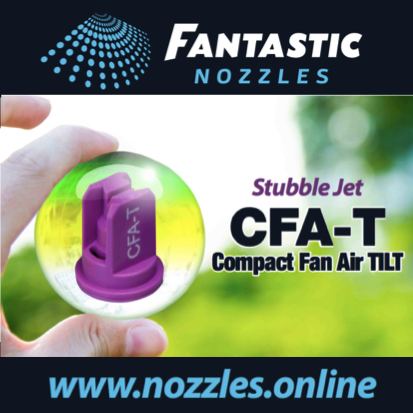 Save your money with our Volume and Special discounts!!